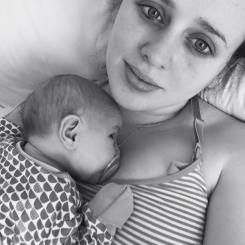 Ok. So. This is a something I’ve been thinking about writing for a long time and I may possibly freak out and delete it two second after posting. But let’s see how it goes!
Stretch marks. The wonderful prize you’re left with at the end of pregnancy. Well admittedly not everyone but if you’re lucky like me you’ll end up with more stripes than Tony the Tiger!
Now I’m no stranger to stretch marks, my thighs are covered in them and they’ve never really bothered me.
At one of my appointments (around 25 weeks) the midwife was impressed that I hadn’t a single stretch mark on my belly. Woohoo! But that didn’t last long. I’m pretty sure she jinxed me or put a hex on me…
The next week I was getting out of the bath and I saw it. The first of many lines that would cover my entire belly.
At the time it was no more than a few centimetres but it was there right bang in the centre. Ok cool. No problem! I can deal with that, like I said I was used to them.
Something you may or may not know about me is I’m incredibly self-conscious. Not vain, but self-conscious. From as long as I can remember I’ve been anxious. I’ve come a long way from the teenager that refused to leave the house for fear someone would look at me and laugh at my teeth, or how ‘fat’ I was. Ahh if only I could tell 13 year old me that I DEFINITELY wasn’t fat…then. I could be in a shop and have someone laugh from across the floor and I’d be convinced they were laughing at me. It wasn’t fun. But thankfully as I’ve gotten older that voice inside my head has gotten quieter and now is barely a whisper. It used to tell me I was stupid, not worthy, ugly, fat, you name it! Any put down you can think of ran through my head over 100 times a day. Some days the voice is louder and more frequent than others but I’m stronger now and since having Callie I’m able to crush it within seconds.
When the stretch marks started to appear so did the voice again. But just for a while. I felt guilty for hating them. I had wanted so badly to be pregnant and this was just part of the package. I felt like I couldn’t complain about any pregnancy symptom because I got met with “Well you wanted to be pregnant”. Yes I did, more than anything in the world! But I wasn’t prepared for the constant morning (more like all day) sickness, the SPD, the reflux and yes the stretch marks!
I don’t know why they bothered me to begin with; my leg stretch marks never bothered me, it’s not like I wear shorts/dresses anyway and before getting pregnant I was comfortable in my own skin. Jenny loves me for who I am and that’s all that matters.
But when they cropped up I got worried that she wouldn’t. I mean it was bad enough I was putting on weight but the fact my body would be permanently scarred, I just hoped she wouldn’t think any differently of me.
But Jenny being Jenny didn’t care one bit. She loves them and me just as much as she did before. She says it’s a reminder, like each line represents a day Callie grew inside me. And she’s right. I’m proud of what I’ve been able to do. I grew our baby girl! So I’ll take every single one of those stretch marks and embrace them with pride. It’s not like I was a bikini kind of girl to begin with!
So here I am with my lumpy, post Flumpy bits and I couldn’t be happier

5 thoughts on “More stripes than Tony the Tiger”